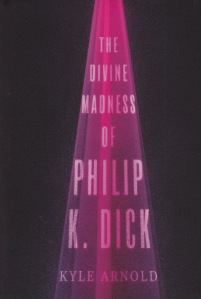 Growing up evangelical, one of the popular topics of conversation was crypto-christians. (My spellcheck insists that this is a lowercase expression.) Crypto-christians are people, generally famous people, who might be secretly “Christian.” You see, despite stereotypes most evangelicals really do want people to go to heaven. In fact, they tend to be obsessed with it. And besides, it can’t hurt to have a celeb backing your claims. One name that never came up in my circles was Philip K. Dick. I grew up reading science fiction. My reading patterns (which haven’t changed much) involved reading what I could find among used books at Goodwill. We were poor, and besides, there were no bookstores in our town. Like many people, I’m sure, I learned of Dick by watching Blade Runner. I occasionally heard others discussing the movie, but I hadn’t seen it myself and thus continued blithely unaware until I began teaching. I then read how Blade Runner is a possible Christian analogy, and curious, I read Do Androids Dream of Electric Sheep?

Since then Dick, who never made it big in his lifetime, has become a staple of the sci-fi diet. In The Divine Madness of Philip K. Dick Kyle Arnold explores the now famous 2-3-74 episode. Dick, in addition to being over-medicated, had mystical experiences. The “big one” took place beginning on the date implied in its title. This vision, while not orthodox by any standard, is clearly religious. Critics tend to think that Dick may have either faked it or that he underwent some kind of schizophrenic episode. Arnold, a clinical psychologist, has the chops to demonstrate that these latter explanations are off base. Dick had a legitimate visionary experience—something even neuroscientists can’t access because the experience is subjective and personal. It had a large impact on his life, but it did not make him mentally ill.

Arnold is not, as far as I can tell, a crypto-christian hunter. He is a psychologist attempting to understand a most complex and tormented writer of superior science fiction. What becomes clear, however, is that Dick was well-informed about Christianity. He imagined himself a secretive first-century Christian in an oppressive Roman Empire. This aspect of his life tends not to emerge in pop culture discussions—how Christian can you be and still be cool? Certainly Dick was not a conventional believer, but religious imagery and even actions became some of the most important moments of his life, according to his own recollections. Philip K. Dick was clearly a haunted man. And one of the specters haunting him was an often undiagnosed religion.