Many modern mini-holidays are centered around things you might buy. I don’t mind that so much in the case of Independent Bookstore Day—of which I wish you a happy one. Quite by accident I found myself in an independent bookstore just last night, not aware I was prematurely celebrating. If anything might save us from the muddle we’re in, it’s books. We live in a society with plentiful distractions, many of them shallow. Books take some effort. They demand your time. They make you take some quiet space to think. Books came along with, and perhaps were the source of, civilization. Today we’re harried and hurried and frantic with an electric source of information and entertainment that never turns off. And we’re seeing the results of that playing out on an international scale. How different it would be if we’d grab a book instead! 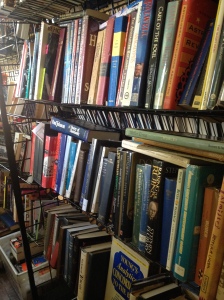 The strange thing is that those inclined to action often suppose reading to be an utterly passive activity. The basis for human progress, however, has often been what someone has read. Surprisingly, books can be the source of progress. When we see reactionary elections taking place around the world, leaders who don’t read emerge as the hailed champions of regress. We’re living through that right now. Books can be dangerous. Think about it—you’re being given access, however briefly, to someone else’s mind. The combined power of minds is an impressive thing. If what I’m reading is anything to go by, the hive mind is a source of incredible strength. You want action? Put multiple minds together. There’s a reason that civilization has gone hand-in-hand with literacy.

In the wake of Borders going under, independent bookstores have started to make a comeback. Those of us who work in the publishing industry have to keep an eye on those numbers. A visit to a bookstore is all about discovery. Quite often I’ve walked in with a list in hand. When I exit my list has grown rather than shrunk, and the purchase I’ve made was likely not on the list to begin with. Independent Bookstore Day gives us a chance to think about how very much we do not know. Unlike those who claim power and brag that they don’t read, admitting that we have more to learn is the way toward progress. I may not be the most active man in the world, but I do recommend action in the form of getting to a bookstore. If we each do our part, we can’t help but to make the world a better place.