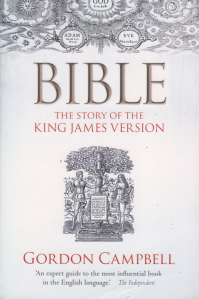 Nothing is as simple as it seems. Not that the Bible ever claims simplicity for itself. Among those who make up their minds before seeing all the evidence, there’s a strong preference for the “King James Version” of the Bible. Many with that preference will claim that they don’t interpret the Good Book, they just read it. Reading itself is an act of interpretation and stakes tend to be pretty high when the claim for divine authorship is on the table. So I figured I’d better interpret something about the King James Bible myself. Gordon Campbell’s Bible: The Story of the King James Version is an informative, authoritative, and often witty treatment of the topic. One of the immediate takeaways is that there is no single KJV.

Beginning in the beginning, Gordon tells the story of the Bible in English. There were translations before the King James, and its translation companies used these previous efforts and sometimes borrowed extensively from them. In other words, there’s nothing new under the sun. Once the King James was done in 1611 it had to be printed, and printing, being what it is, led to errors. Although these were of the secular, human kind, they nevertheless appear from the beginning and new typesettings led to corrections and other errors, some perhaps intentional. Then came the revisions. What readers buy—and some claim is an inspired translation—as the KJV is a revision of a revision. Of a revision. In other words, the inspiration seems to lie with the redactors rather than the translators themselves. There are many different “official” King James versions. Translations are never static.

King James Onlyists (a modern movement) may not realize that the New Revised Standard Version is the modern descendant of the King James. The Revised Version (RV), followed by the Revised Standard Version (RSV), and its more recent, feared progeny (the NRSV) are all based on the King James translation. That is the version “Revised” in each of these efforts. They consult improved versions of ancient texts that have been discovered since the Jacobean era, but where they earn the ire of conservatives is in the updating of the modern language. A Bible with no thees or thous hardly seems sacred at all. The line of continuity is there, however. Other Bible translations “start over” but still consult the KJV, such is its stature. The real problem comes in supposing that any one translation is the original. No original Hebrew or Greek biblical manuscripts survive, and no original King James Version exists. How uncomfortable these facts are, everyone will have to interpret for her or himself.

5 thoughts on “Only Which King James?”