Call me Ishmael. There was a time when I heard about archaeological discoveries impacting the Bible soon after they were made. Now I have to wait until they appear in the paper, just like everybody else. When I saw a story asking if a recently found statue head might be that of Jezebel’s husband a number of things occurred to me. First of all, how cool is it that a king is referred to as the husband of a more famous wife? Well, I suppose Jezebel is infamous, but as the Washington Post article I read indicated, some biblical scholars are inclined to view her more sympathetically as a strong woman in a patriarchal morass. Seems like something we should be able to understand these days.

Another issue is that underlying bugbear of wanting to prove the Bible true. There is little doubt that Jezebel’s husband, a king by the name of Ahab, existed. Quite apart from the Bible he is historically attested—one of the earliest biblical characters to have received outside verification. If he actually struggled with a prophet named Elijah or not, we can’t know. In any case, the non-talking head of the statue looks like just any other pre-Roman guy with a crown. The article wistfully wishes the rest of the statue could be found, but one thing that we know from ancient iconography is that ancient figures, be they gods or heroes, are seldom inscribed. As I long ago argued about Asherah, without definitive iconic symbols to identify them, ancient images must remain ambiguous.

What would iconically identify good old Ahab? Certainly not a white whale—it’s far too early for that. He was represented in the book of Kings as the worst monarch Israel ever had. Politically, however, he seems to have been somewhat successful. Would he have been represented with the grapes of Naboth’s vineyard? Or, like a saint, holding the arrow that eventually slew him in his chariot? Ahab is a mystery to us. Unlike Melville’s version, he’s a man eclipsed by those in his life, notably the prophet Elijah and his wife Jezebel. Although the latter’s been baptized into the acceptable form Isabel, her name is synonymous with being a woman who knows what she wants. In the biblical world her main crime was being born into a family who worshipped Baal. The difference between her day and ours is that if a Republican president declared himself a Baal worshipper, evangelicals would cheer and joyfully follow along. Rachel, after all, cannot stop mourning her lost children. 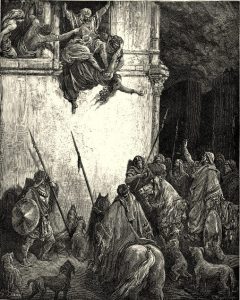