With weather like this, I could use a Psalm or two.  Of course, in my mind, weather and Psalms are closely connected.  Here in the mid-Atlantic states, we’ve been experiencing a heat wave.  Unlike many parts of the west, such heat here in the east is accompanied by very moist air, meaning that cooling down is only possible in a large body of water or air conditioned interiors.  We have neither readily available at our place, so we try our best to keep cool and compose psalms, mostly imprecatory, I fear, about the weather.  Although it was thunderstorms that stirred my interest to write Weathering the Psalms, I included a chapter about temperature, for the Psalter sings of hot and cold as well as lightning and thunder.

The world of ancient Israel was quite different from that of North America.  There are mainly two seasons in the Levant—dry and rainy.  The dry season isn’t always as hot as we tend to imagine it, although the day I visited Masada the air temperature was about 120 degrees.  Enough to make a dip in the Dead Sea look inviting.  The Bible often views high heat as a form of divine punishment.  Although we human beings have expanded to fill just about every ecosystem our planet has to offer, we thrive in central California conditions.  Not all of us can live there, however.  And it’s a good thing that global warming’s a myth since it’s awfully hard to function when it is over 90 degrees for days in a row.  WWDD?  What would David draft?  Perhaps, “I’m melting”? 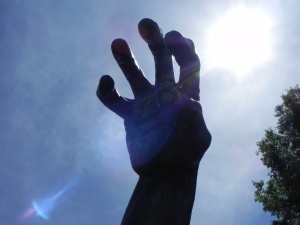 The interesting thing about the global warming myth is how real it feels.  I suppose the solution is to use more fossil fuels to help keep cool.  Fans, arctic air conditioning, lingering languidly at the open freezer door.  I stand here sweating, wondering what the Almighty could possibly find wrong with a country that is now great again.  One that takes children from their mothers yet insists birth control is evil.  One that loudly and punishingly insists guns should be in every home.  One where the elected head of government is involved in over 3,500 lawsuits, yet gets to appoint justices in the Supreme Court.  David got caught, if not in flagrante delicto, at least within a couple months of adultery with Bathsheba.  Instead of paying her off, he had her husband murdered.  But then—and here’s the key difference—he humbled himself and repented.  The sweet Psalmist of Israel might yet have something to teach us yet about weather and the Psalter.  Until the United States becomes the chosen nation again, I think a cold shower will have to do.