Pop culture borrows from religion without knowing it.  Or maybe it’s just that religion has become so irrelevant that people no longer care.  Whichever may be the case, those who contribute to pop culture have a rich treasury from which to take withdrawals.  This occurred to me while waiting for a bus into New York.  Many people don’t want to stand in line (who does, really?).  In the Park-n-Ride subculture, you may leave an avatar in your place.  It’s probably not called an avatar, but since there’s nobody here to ask, I’m going to use the pop culture name.  You put your bag on the pavement, marking your place and then go sit in your car.  Since I’m going to be sitting in a big car for the next two hours, I prefer to stand outside. 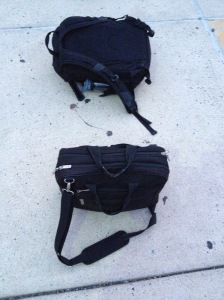 The idea of an avatar is mediated to most people through either computer language or the movie.  I first encountered the term in the former sense in Neal Stephenson’s Snow Crash.  I was an internet neophyte and had trouble conceiving a virtual world in those days.  Some time later came the latter.  James Cameron’s film embodied the idea—linked through software, the tired hardware of physical bodies could be given new life.  In some senses it was an even better life.  Now everyone knows what an avatar is.  Perhaps except that the idea is native to Hinduism.

Hinduism was never an organized, intentional religion such as Christianity.  It is rather a wide array of traditional beliefs that, in the light of missionary activity, had to be given a name.  There are many gods in Hinduism, and when a deity descends to earth s/he appears in a form recognizable to humans—an avatar.  Not being an Indologist, my understanding of the concept is very basic, but it’s enough to know that this religious idea found a role in pop culture first through computer representations of human beings.  We had flattered ourselves with being gods, since we had created a virtual world.  A world we couldn’t physically enter.  Avatars were, therefore, how we wanted others to experience us.  Snow Crash is peopled with all kinds of representations.  The internet today, nearly 30 years on, has many more.  After all, there are many gods.

I glance at my watch.  The bus should be here any minute now.  When it enters the lot I’ll see the deities behind these canvas and leather avatars.  They’ll be less impressive than I’ve imagined them, I’m sure.  And although we’ve created virtual reality, I still have to get on a physical bus to go to virtual work.