In our current political climate, perspective helps quite a bit.  Indeed, one of the shortcomings of our conscious species is our inability to think much beyond the present.  In either direction.  Because of the biblical basis of western civilization, a significant portion of otherwise intelligent people believe that the world was created 6000 years ago.  I grew up believing that myself, before I learned more about the Bible and its context.  I also grew up collecting fossils.  Somehow I had no problem knowing that the fossils were from times far before human beings walked the earth, but also that the earth wasn’t nearly as old as it had to be for that to have happened.  Faith often involves contradictions and remains self-convinced nevertheless. 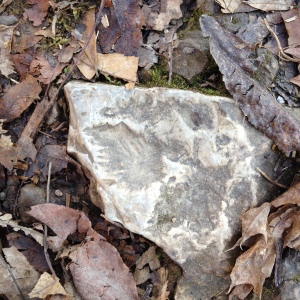 While out walking yesterday I came across a fossil leaf.  Unbeknownst to our movers last summer, I have boxes of fossils that I’ve picked up in various places that I’ve lived.  I find it hard to leave them in situ because of the fascinating sense of contradictions that still grabs me when I see one.  There was an impression of a leaf from millions of years ago right at my feet.  It was in a rock deeply embedded in the ground and that had to be left in place.  Never having found a floral fossil before this was somewhat of a disappointment.  Still it left an impression on me.  Perhaps when dinosaurs roamed Pennsylvania—or perhaps before—this leaf had fallen and been buried to last for eons.  How the world has changed since then!

After that encounter, I considered the brown leaves scattered from the recently departed fall.  Some lay on the muddy path, but few or none of them would meet the precise conditions required to form a fossil.  If one did, however, it would be here after humanity has either grown up and evolved into something nobler or has destroyed itself in a fit of pique or hatred.  We know we’re better than the political games played by those who use the system for their own gain.  The impressions we leave are far less benign than this ossified leaf at my feet.  The Fundamentalist of the dispensationalist species sees world history divided into very brief ages.  God, they opine, created the entire earth to last less than 10,000 years.  All this effort, suffering, and hope exists to be wiped out before an actual fossil has time to form.  It’s a perspective as fascinating as it is dangerous.