Are we really happier for instantaneous news?  Has the internet brought us paroxysms of ecstasy with the quality of information?  Wouldn’t you just rather wait?  I don’t think we should go to extremes, or go backward.  Samuel Morse, it is said, developed the telegraph in part because he was away from home and only found out about his wife’s death after her burial, for which he could not return in time.  More rapid communication was necessary and the telegraph provided the means.  No, I’m not suggesting that happiness lies in being uninformed, but perhaps I lingered long enough among the Episcopalians so as to believe in the via media, the middle way.  Some of the happiest times of my life have been spent without a screen glowing in my face.  There is, however, good stuff here.

One example is blogging.  I wish I had more time to read blogs.  Verbomania, for example, showcases writing that sparkles.  The weekly posts set me up for a good weekend.  There are many more that I could name as well—and for me blogging has become a way of life.  Marketers call it “platform building” but I think of it as fun.  And the practice I get writing this blog daily has made my books much more user-friendly.  A family friend with no college education tried to read Weathering the Psalms, with “tried” being the operative word.  There’s no comparison with Holy Horror.  (Weathering the Psalms was written to be my “tenure book,” and it may well be my last technical monograph.)  I have this avocation of blogging to thank for that.

But instantaneous news—does it make us happier?  Sometimes perhaps, but often the opposite.  It’s a phenomenon I call the internet of unhappiness.  (There’s a whole field of study emerging called “the internet of things,” which, no matter how much I ponder I just can’t comprehend.)  News, after all, tends to focus on negatives, as if there’s too much happiness in our lives.  Just yesterday there were early morning helicopters hovering not far from where I live.  Within seconds I could learn of some kind of domestic dispute about which I’d otherwise have been none the wiser.  The next few hours I spent occasionally reloading the page for updates.  They didn’t make me happy.  Add to that the three-ring sideshow that the American government has become and you’ll soon be wanting just three channels from which to select before turning off the TV and going outside for a walk.  And when the 1970s start to look like happy times, you go to your closet and start digging for the semaphore flags. 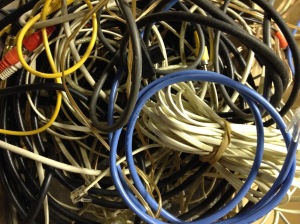 They must be in here somewhere…

1 thought on “Internet of Happiness”