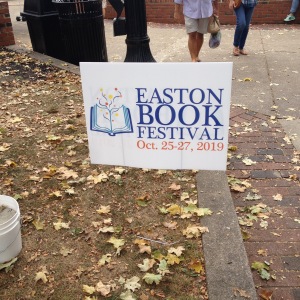 Now that it’s October, it’s officially okay to be scared.  Determined to fight my fright of hubris, I make brave to mention that I have two appearances scheduled for the first ever Easton Book Festival, coming up from the 25th to the 27th.  The Festival has turned into quite an event, with some 200 writers taking part.  I got involved by being in the right place at the right time, for a change.  Authors are being brought in from as far as New York City, Vermont, and Massachusetts.  I know from experience that even Manhattan is a trek.  I contacted the organizers back in the summer since I have an autumn book that came out in late December last year.  For the festival I’ll be involved in a panel discussion “Poets as Prophets—Merging Art and Religion” on Saturday, and a presentation on Holy Horror on Sunday.

Like many people who write, I’m shy and not naturally good at promoting myself.  The other day while out for a walk my wife and I were run by by a group of shirtless high school guys, presumably on the track team.  It felt like the gallimimus scene from Jurassic Park—we’re smaller folks, and these confident, athletic sorts were not.  It felt like an object lesson to me.  Some of us are born with genetic dispositions to grow large and to feel confident.  Others not so much.  When we watched the caber toss at Celtic Fest last weekend, the contestants were all well over six feet tall, which I suppose makes sense if a caber is in the cards for you.  As they showboated for the crowd, I knew a small display with my book was just up the hill in the Moravian Book Shop.  Like me, in the shadows of the shelf above.

Perhaps my only regret about the Easton Book Festival is that I don’t have a fictional novel to present.  Well, I do, but it isn’t published.  Lately I’ve been exploring that wall of separation between fiction and non.  In the kinds of books I read in the fall, the wall is more of a hurricane fence.  And it’s only about waist high at that.  Holy Horror isn’t an academic book, it just plays one on the market.  If it were a standard academic title I wouldn’t have put it forward for the Easton Book Festival; people come to such events to be entertained as well as to learn.  This one will encompass pretty much all of downtown Easton for the weekend.  And that weekend is just before Halloween, when the wall between worlds is especially thin.