In a local mall over the weekend where Christmas decorations were being uncrated, I felt cheated.  Now I’m not naive enough to suppose retailers can get by without the black season around Christmas, but as a writer of books Halloween themed I felt as if my thunder were stolen.  The normal person, I suspect, thinks of scary things only about this time of year.  Monsters and horror films are on people’s minds in fall, even though a good horror flick will make a few bucks even in spring or summer.  Halloween has a very small window of appeal, however, followed on closely, as it is, by Thanksgiving and Christmas.  Why can’t we give Halloween its due?

My wife pointed out that Halloween is a big retail event.  Indeed it is.  I started noticing Halloween paraphernalia on the shelves fairly early in August.  I know that even without capitalistic prompting I start to sense the season then.  It’s in the air.  Certain early August mornings you can smell a faint whiff of autumn on a breeze slightly cooler than expected.  The first leaves start to change and fall before September.  It will be another couple of months before the season makes itself felt in full force, but the early hints are there.  A believer in delayed gratification, I hold back.  I  don’t buy, but I absorb.  The melancholy grows through September until as the calendar tells me it is now officially October I can begin to exhale.  This is the time when those of us who are horror misfits can seem somewhat normal.  I walk into a store and “Ho, ho, ho!”  The joke’s on me.

Autumn already slips by too quickly.  Every year before I know it the ephemeral beauty of changing leaves is gone and the subtle chill in the air turns frigid.  Damp leaves are raked up to make room for snow.  The swiftness of this season is perhaps one reason so many people value it.  Summer can stretch long with its uncomfortably warm days and winter can linger for nearly half the year with its opposite feel.  Halloween is a holiday that intentionally falls in the midst of transition.  That transition has been commercialized, however, into buying seasons.  Only halfway through October the price of Halloween goods drops to sale rates.  Corporate offices are chomping for Christmas cash.  What I really need is a walk through the fallen leaves and a few untrammeled moments to consider where we are rather than what we might earn. 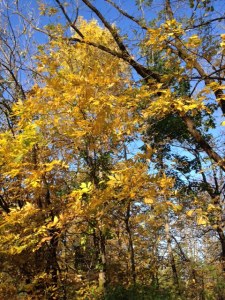