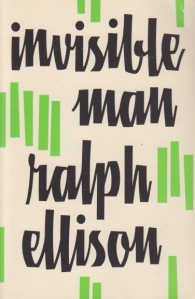 Quite some time ago I realized I should read Ralph Ellison’s Invisible Man.  What put me off, as usual, was length.  Long books take a real time commitment, but since Black History month is coming up, and we’ve just celebrated Martin Luther King, I planned ahead and read.  A profound book, at several points I felt like a voyeur reading it.  The African-American experience of life is something I always feel uncomfortable approaching.  I’m afraid of appropriation, and I’m afraid of not paying attention.  I grew up not having a sense of racism, but nevertheless am implicated in the whole.  Maybe that was intentional.  As a story Invisible Man is often described as a picaresque, but having an unreliable narrator who was a victim of my own culture was difficult to countenance.  It was hard to know what to think.

We never understand another person’s experience of life.  We sympathize, we empathize, but we can’t really get inside the head of even our best friends.  I can’t help but think we’d all be better off we recognized that race is a social construct, and a potentially evil one at that.  We are all human beings and we should act that way.  But this novel left me wondering if it’s really possible.  Good novels will do that to you.  So I’m sitting here scratching my head and a little bit flummoxed by what I’ve just experienced.  Was it authentic or can I not help but project my own experience as an non-minority upon someone else’s writing?  Even questions like this are socially conditioned.  I too am trapped in my own mind.

You might think that by this time we would have evolved beyond our distrust of those long separated from us by natural barriers.  Homo sapiens are distrustful of strangers, and even the internet hasn’t brought us the understanding we require.  Not yet, anyway.  The background to “race relations” in the United States can’t be separated from slavery and the attitudes it engendered.  On almost every page of Invisible Man its traces can be seen.  That kind of cultural memory, and other cultural memories such as Jews being routinely castigated by Christians, or monotheists being raised to combat polytheism, are deep dividers.  Our cure for these evils is understanding.  I had to keep reminding myself that this was a work of literary fiction.  It rings true, however, and although it represents a world I do not know the fact of its publication invites  those of us outside the tradition to read.  Indeed, doing so is one way of attempting to reach understanding.