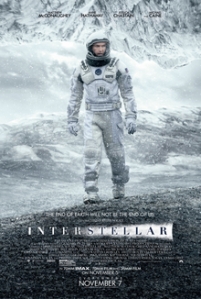 Keeping up with movies could be a regular vocation.  Until it is, however, I will always be running behind.  Seven years ago I planned to see Interstellar in the theater.   Seven years ago we had not dreamed of Covid-19 or a planetary pandemic.  I can’t see now how I would’ve possibly been too busy to have missed it.  If any movie, however, forgives the time-challenged, it’d be this one.  Apart from perhaps being the ultimate father-daughter movie, it plays with time like Inception plays with space.  Or space like it plays with time.  Einstein gave us the laws of relativity, and if they hold up when we finally get to interstellar travel (which has already happened on the space-time continuum somewhere), this is perhaps not at all unlikely.

Back in my teaching days I used to tell students that if they didn’t read at least one book during the summer or winter break that didn’t challenge their worldview then they’d wasted that break.  It was something I did my best to live up to.  Informing yourself—challenging your views—is a feature of education at which we seem to have failed.  Movies like Interstellar are examples of such challenges, albeit in the guise of fiction.  I’ve come to trust Christopher Nolan over the years.  His movies are cerebral yet moving, making us look at things from angles we didn’t know had existed.  I grew up watching not just horror, but also science fiction.  While I gravitated toward the former, I never lost my appreciation for the latter.  Especially when the latter made me think.

Much of Interstellar is, like the best of movies, is informed by previous films.  The influence of 2001: A Space Odyssey is pretty clear, as is that of Contact.  The idea at the center of Interstellar is that love drives the five dimensions in which Cooper finally ends up.  The love of a father for the daughter he had to leave behind and her love for the father that had to abandon her to save the world drives the entire plot.  To me this seems the right balance between science and spirituality.  Love is humanity at its best while science is some of our most advanced thinking at its best.  To recognize the strength of the former is important in a world increasingly driven by technology.  It took me, it seems, a full hour on the water planet to find the time to watch Interstellar.  It is time I won’t get back and I could have used some of it wisely by watching this movie sooner.

One thought on “Space and Time”