I don’t have any bumper-stickers on my car. As clever as I may think any particular one to be, driving down the highway is not the place that I want other drivers to get ticked off at me. A more judicious use of turn-signals would be my preference over mass-produced witticisms. I suspect that most readers know of my liberal leanings. Some have even bothered to inform me that they no longer read my musings precisely because of this. On the information superhighway, unlike the real highway, you can just click off and not be annoyed anymore. My bumper, therefore, will stay clean. While in a parking lot recently I saw a bumper-sticker reading “Not A Liberal.” I had to ponder this a bit. 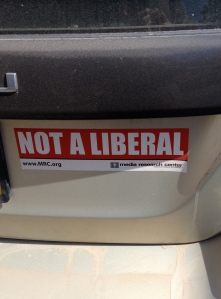 I grew up conservative, although, as working-class folk, we didn’t label ourselves with that word at home. I wouldn’t have even known what it meant. Liberal, in its basic form, has to do with generosity and being respectful of others. The media has built it up into a kind of evil juggernaut that intends to take over the safe, unchanging world of religion and politics. I wonder how liberal became a dirty word. Who, among your friends, would want to remain so if you disrespect their views and refuse to show generosity? I get the sense that even conservatives are liberal with their friends. When I walk past the homeless sleeping on a subway vent to keep warm, I wonder if conservatives ever read the parable of the good Samaritan. What bumper-stickers would the homeless wear?

A polarized society had better prepare for the big chill. In my admittedly limited experience, people come in a continuum of positions, not just one extreme or the other. It makes better news, however, when we divide into camps, the more clearly to spar with one another. What separates us is more important than what brings us together. Yes, I grew up conservative. I continued, however, to grow up. I suspect in some things I am still conservative, while in many I am liberal. I’m not sure what I’d put on my bumper-sticker. What do I want people to know about me while I’m driving? I think it might be better to suggest “I Respect You,” than an implied “I don’t like your views.” Then again, since it happens so often, I now look for a Jesus fish automatically when I’m cut off in traffic. Be careful of what you put on your bumper, because dirty words are in the eyes of the reader.