Thing Explainer, a whimsical gift for my daughter at Christmas, is perhaps the trendiest present found here this year. Randall Munroe, who makes a living as a web comic artist (who knew this was even possible?) wrote/illustrated the book to explain complicated things in simple words. Indeed, he limits himself, with some license, to the thousand most common words in English. Due to the almost viral success of the book, websites now exist so that even those of us with advanced degrees can explain things with common words. It reminds me of the Common English Bible in that it attempts to make something complicated easy to understand by using a level of writing accessible to the majority of readers. Thing Explainer is, naturally, for fun. There is, however, an underlying question.

Have we reached a point where reading itself has to be enhanced by making it simple? Some things are, by their very nature, complex. At a time when more and more kids are being encouraged to attend college, the traditional basis of higher education (the classics, classical languages, the humanities) has eroded so far that higher education is not what it once was. My daughter’s engineering program is highly technical and doesn’t naturally promote the things I recall as “college.” Maybe I need someone to explain it to me in simple words. What’s wrong with being literate? With finding challenging books worth the effort to get through? Some things are complex. 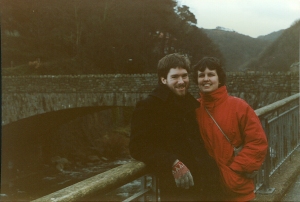 A young couple’s anniversary in Wales.

I wonder how a society survives when complexity disappears. Today my wife and I celebrate our twenty-seventh anniversary. Marriage can be a complex thing, but it is something that can be explained in simple words. When we decided to marry the idea was lifelong commitment, not knowing the twists and turns that life would take. If the Internet existed in those days I didn’t know about it. (Certainly, being a web comic artist wasn’t a job that yet existed.) Doctorates still led to teaching careers. 9/11 hadn’t happened so that living in a modified police state wasn’t yet part of daily reality. There weren’t really words to explain it. It was one of those most basic human things. Turning to Thing Explainer I find that love is one of the thousand most-used words. It does perhaps show, after all, that complex things can be stated in a word we all understand.