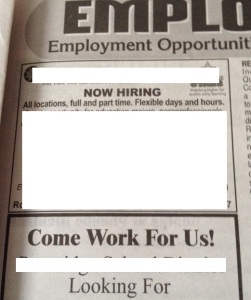 In keeping with my recent theme of jobs you never knew you could have, I recently read a story a friend sent me from The Vintage News.  The story concerns a spiritual counselor who is planning to marry a ghost.  I didn’t know that spiritual counselor was an available job.  You see, I had taken enough psychology courses in college that I could’ve had it as a minor, but I didn’t declare it.  At the time I was destined, or so I thought, for a career in ministry and psychology seemed a good subject to assist with that.  Also, I naturally tend to try to figure out what motivates people.  Like most career options, not having a science background prevented me from pursuing psychology as a fall-back career.  But spiritual counselor?

The woman in the story lives in the United Kingdom.  Here in the United States, where unhappy people seek any opportunity they can find to sue someone, having a job as a spiritual counselor probably involves ordination.  Even if you’re ordained, as I learned from long years both attending and teaching in seminaries, you always refer those who come to you to a licensed psychologist.  Clergy can easily be sued for providing bad advice.  That’s why the counselor part of this job seems so odd to me.  That, and the woman the story features is only 27.  I suppose that’s time enough to finish a doctorate, for the truly ambitious, but apparently she doesn’t have a terminal degree.  Just a post-terminal lover.

Also, I learned that spectrophilia is a condition with a name.  The idea of intimacy with spirits is nothing new, of course.  The ancient idea of incubi and succubi reflect this concept, and a number of the stories in the Ed and Lorraine Warren oeuvre include sexual attacks by demons or ghosts.  What’s different here is that the young woman wants to marry a spirit she can’t see.  Unlike most such reputed cases of spectrophilia, she claims spirits are superior to physical lovers.  Despite the oddities that make such a story newsworthy (in a sense) a potentially important point could emerge from all of this.  Love is not a physical phenomenon.  We all know it when we feel it.  I suspect that other such feelings, like finding the perfect job that matches your skills and interests, are likewise intangible.  The problem is finding out that such jobs even exist.