Reading about demonic possession is enough to scare you away from ever using a ouija board.  In fact, I’ve never played with one; growing up my strict religion would’ve prevented it in any case, and already as a child I’d been warned of the dangers.  During my research for Nightmares with the Bible, I’ve been reading quite a bit about ouija.  Originally a species of divination, the ouija, or spirit board, became popular during the growth of Spiritualism.  Spiritualism is a religion based on the idea that the dead still communicate with the living, ensuring believers that life continues beyond death.  It still exists, but not with the numbers that it boasted in the early days.  Among the solemn admonitions of Ed and Lorraine Warren (about whom I’ve posted much in recent months) was that ouija boards opened doorways for demonic entities.  Some of their stories are quite scary. 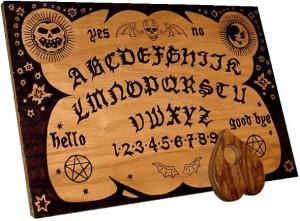 Whatever else you can say about America, a fact beyond dispute is that if something can make a buck it will be marketed and sold.  So it was with ouija boards in the 1970s.  I remember seeing them on the shelf with other games at local department stores.  Even then I knew they weren’t a toy and I wondered how anyone could be promoting them for general consumption.  At Grove City College—that bastion of undergraduate conservatism—stories circulated about how students (usually coeds) were attacked in their locked rooms after playing with ouija boards.  This is, I was later to learn, a staple of collegiate urban legends.  At the time, however, I took it very seriously.

Thus it’s strange when I find out that others my age were more curious about them.  Recently at a party with friends around Valentine’s Day, the question naturally came up of how some of us met our spouses.  One of the women mentioned that before she’d met or even heard of her future husband (who has an unusual surname) a ouija board spelled out his name.  She later met and married him, not on the board’s recommendation, but she remembered that years before she’d been given a hint.  Now these friends are not cheats and liars—they’re not even Republicans.  They’re people we trust.  On our drive home that night my wife mentioned she’d used a ouija board once, with friends, back in her high school years.  She asked the name of her spouse (long before we met) and came up with Sam.  I’m no Sam, but when we first met in grad school I was still going by my stepfather’s surname and my initials were S-A-M.  Coincidence?  Probably.  My future wife did not pursue me; indeed, it was the other way around.  Even so, there in the dark on the nighttime highway I felt a familiar frisson from childhood concerning a form of divination that seems to know more than it should.