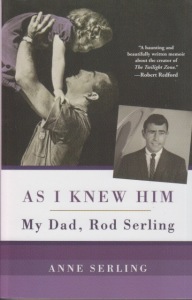 My youth—who am I kidding?—my life has been a search for father figures.  Since I grew up with television, many of them came from the tube.  The professor from Gilligan’s Island, Mr. Rogers, Barnabas Collins, and Rod Serling.  Serling was like the father I couldn’t remember in that he was always smoking.  But unlike my father, Serling had an imagination in sync with mine.  The Twilight Zone was in reruns by the time I caught up, but it gave me an odd kind of happiness.  The sort that you had as a kid after the bath was over and you were wrapped up snuggly and warm in a bathrobe, and you got to watch one of your favorite shows before going to bed.  I discovered Serling as a writer when I was in Junior High School.  He was right up there next to Ray Bradbury, in my book.

I have to admit to feeling anxious as I read Anne Serling’s As I Knew Him: My Dad, Rod Serling.  You see, she actually was his child and I’m afraid of learning too much about those I put on my personal pedestals.  Her book, however, didn’t disappoint.  Serling lived a writer’s life, something I’ve coveted since I was a kid.  If I couldn’t have a father, at least I could write about life as I saw it.  I still write fiction inspired by, among others, Rod Serling.  Spending much of my time in Binghamton and Ithaca for my own family reasons, I was only obliquely aware of how much I was traversing the region Serling considered home.  As I read his daughter’s autobiography—or is it a biography?  Who can tell the difference?—I was inexorably drawn in.  Fathers and daughters can be the best of friends.

Sometimes I wonder if those who know writers the best are their true fans.  I don’t mean groupies or the like, but rather those whose lives have been transformed by their words.  I’m reminded of Evermore, written by a relative of Edgar Allan Poe.  Family, it is true, see a side of a person that the reader does not.  But who are we, really?  Those of us who write may be saying more in our fiction than we care to admit even to those who know us well.  Rod Serling recognized dimensions well, I suspect.  A writer’s life requires sacrifice and keeping things hidden.  Anne Serling’s book is a gift to those who write, even if it is about someone else’s father.

One thought on “The Zone”