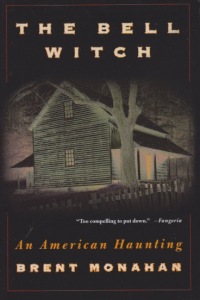 The Bell Witch: An American Haunting, by Brent Monahan, is a book I’ve read before.  The subtitle was used for a cinematic version.  I discovered the book, however, through what might be considered a chance encounter with the author.  He was teaching a course on offering distance education courses at Rutgers University, and, as an adjunct teaching over eight classes per year, I’d been selected for the distance education program.  (As life goes, of course, I was hired by Routledge for a full-time job before I could actually deliver the course.)  By a strange irony, I had watched An American Haunting just the weekend before the course, and I had no idea who would be teaching it.  Neurotically punctual, I was the first one there for the class, and as Dr. Monahan and I talked, I knew I’d need to read the book.  I posted on it back when I did, but this time I decided to pay better attention than one can on a bus.

Of course, when you watch the movie first, which I had, you know “the reveal” well before it comes late in the novel.  In case you’ve done neither, I won’t give it away.  The tale is based on an historical haunting, attested in sources from near the period.  And it is a strange kind of possession story.  The “witch” is actually a demon conjured by a trauma, and although book wraps things up nicely, it leaves a few questions at the end.  I suppose that’s appropriate for a scary book.  One of my current projects involves tracing the accounts behind fictionalized narratives to their originals.  The Bell Witch was well researched, and is a good example of how the line between fiction and fact can be effectively blurred.

The Bell Witch legend is credited with influencing several horror films, including The Blair Witch Project and others which tellingly have “Bell Witch” in their titles.  The story has a fairly incredible longevity, given that it was a localized legend from early in the nineteenth century.  Monahan’s novel is written as a “confession” from the schoolmaster, and historical personage Richard R. P. Powell.  This blurring of the lines makes for the kind of ambiguity that gives horror its particular ability to stand between fact and fiction.  The early versions of the lore, combined with elements intended to offer verisimilitude, leave plenty of queries at the end.  So much so that I’ve occasionally contacted the author for clarification.  What really happened?  It depends which side of the line you prefer.