There’s an old adage that if a headline asks a question the implied answer is “No.”  I’ve found that to be true, largely.  I hoped differently when I saw the article titled “Are Horror Films Secretly Spiritual?” by S. Rufus in Psychology Today.  Rufus, admittedly not a fan of horror, ponders whether it might not meet a spiritual need for some.  She would not count herself among that number, should the assertion prove to be the case.  Indeed, her post has more sentences ending in question marks regarding this assertion than it has straightforward declarative ones.  Rufus notes that ancient religions involved a kind of fear-based response appropriate to the lifestyle of those open to constant threat by the natural world.  She seems to believe that civilization has saved us from that.

Now one of the questions with which I constantly struggle is why I watch horror.  I do not like being afraid, and when people find out about my fascination with horror they tend to treat me as if there’s something wrong with me.  I guess maybe I think that civilization has not so much eliminated the sources of threat so much as changed them.  Those who grow up poor know fear.  Fear of want is extremely prevalent in our capitalist society.  I see the “street people” when I go into New York City.  They are not few.  Once you start to get away from affluent suburbs just about anywhere you start to see the run-down houses of those who can’t cope with the demands of a consumerist society.  Even those of us with an education are liable to joblessness and the very real terror that attends it. 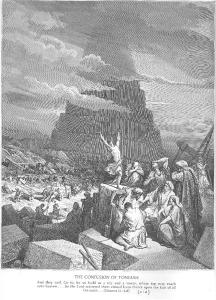 Civilization, in other words, comes with its own costs.  Religions originally began—some of them at least—largely from the fear response.  Yes, people were afraid.  The gods, properly propitiated, stay the hand of disaster.  For now.  Some religions, such as those in the monotheistic family tree, tend to suggest higher principles like love can be the motivation.  These religions, however, quickly begin to make threats against those who are heterodox, and reintroduce fear into the formulation.  I suspect, from my own experience of all of this, that the answer to the question may actually be “yes”—horror films do offer something spiritual.  There is a catharsis, if I may borrow a term from psychology, in them.  The spiritual element may, however, run much deeper than that.  Until human society truly takes love and justice as its operating principles, we will have horror films to help us learn to cope.