First time home ownership is best left to younger people.  And perhaps younger houses.  The constant onslaught of things falling apart, or falling off (it has been an extreme weather year) has soured me on the idea.  You get set in your ways, you see.  The move from apartment to house didn’t come with a raise that would cover all the repairs invisible to a home inspector’s eye.  Although our house has stood for over 120 years, the last owners let lots of things go with a lick and a promise and we, the naive middle-aged first-time buyers in a seller’s market, bit.  I thought there would be repairs to make, but not all at once.  The royalties from books like Holy Horror don’t make even a small dent in the contractor’s fees.  We should maybe have bought a house in Jericho instead.  One right on the city wall.

The shake-down voyage of a ship reveals the problems, so the theory goes.  It stands to reason that people have to go through a shake-down year as well.  I’ve got the roofer on speed-dial, and I keep a wary eye on a garage that has more love than actual care poured into it.  All I want to do is read and write (which I could do just fine as a renter, thank you) in a place dry and not too cold.  The weather, however, has been unforgiving.  Rain and more rain.  There’s something primal about all this—an element of having to struggle against nature in order to survive.  In the modern world we’ve taken for granted our ability to keep the beasts and weather at bay.  Storm systems like the one that has just blown through serve to remind our species that there are things that will forever remain beyond our control. 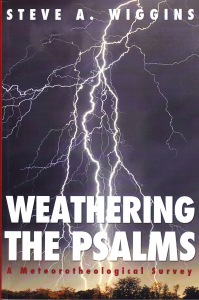 The lament is the most numerous genre of psalm

Something like this was going through my mind as I wrote Weathering the Psalms.  (We didn’t own our house at Nashotah House, though.  Whose house?  Nashotah’s house.)  Living in the Midwest gave me a new appreciation for the weather.  Some of the storms we witnessed were nothing short of theophanic.  Global warming has a way of bringing the weather front and center.  Elements of this element, however, are within our control.  We understand at least the human-driven elements of global warming.  We deny they exist to scrape together a few more pennies at the end of the day.  Meanwhile those who buy houses need to do their homework.  If need a roofer too, I’ve got one on speed-dial.