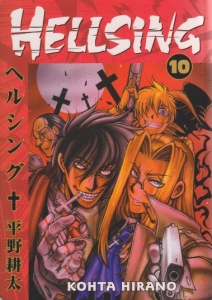 Perhaps it’s from growing up as a biblical literalist, but I’ll probably always have problems with post-modernism.  You see, when you’re taught as a kid that there is one absolute right and you already know it (it’s Genesis to Revelation, no Apocrypha, please), you kind of get the idea that things are just what they seem.  Po-mo teaches, among other things, that there’s no true objectivity—reality is subjective and there is no neutral ground upon which to stand.  I’m down with that, but the old ways of looking at things remain.  This is a long-winded way of saying I finished Kohta Hirano’s ten-volume manga, Hellsing.  Over the past year I’ve been reading for a friend of mine, but manga has never really been my thing.  I read The Watchmen as a graphic novel, but looking at pictures somehow feels like cheating.  It’s that literalist thing again.

I might be dropping some spoilers here, so if you’re even slower than me be warned.  There’s quite a bit of shape-shifting here and it’s not always easy to tell who’s who.  In a kind of homage to my childhood monsters there’s vampires, werewolves, and even a Frankenstein’s monster in the series.  All of them are engaged in a constant state of combat against which the Protestant Hellsing organization stands for a stable civilization.  The Catholics are associated with Nazis along the way.  It’s a fascinating look at how an eastern culture might view the religious wars of those in the west who all go by the name “Christian.”  I think this is the genius of the series.  The friend who lent me the volumes has no declared faith, but he finds the dynamic fascinating.  Real religious fighting has made it easy for him.

The story, however, falls clearly into the generation of those without absolutes.  For someone my age a plot clearly laid out is a thing of beauty.  In college we used to argue about how absolutes might exist.  Where did they come from, and which is the strongest?  Did God make them or does God have to conform to them?  Even without the answers, the fact that absolutes existed was assumed.  Argument-driven science tells us that a theory is never proven.  Science is the best explanation we have at the moment, based on the evidence amassed.  In its own way, it has become post-modern.  Hellsing is a kind of mind-blowing work.  It will likely be a long time before I attempt another manga series.  Although I accept the po-mo premise, I still find old-fashioned fiction my favorite.

One thought on “Strange Ending”